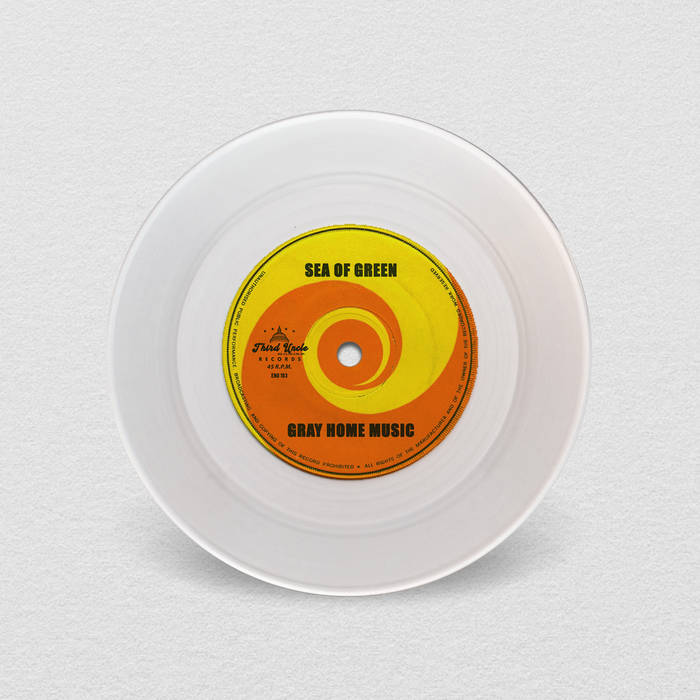 The lyrics to Gray Home Music's "Sea of Green" begin with the lines, "When I was 4 or 5 / I used to have 45 / of Yellow Submarine / and it skipped on sea of green." Graham Wood's remembrance of his childhood Beatles 45 seemed like the perfect release to celebrate his 45th birthday on April 8th. Too bad there wasn't an actual release...

Then it hit me - oh wait! I actually have a copy of "Sea of Green" on a 45! Back in 2010, when I was first really investigating lathe cutting, I had a single test record made of "Sea of Green" on a clear 7" cut at 45 RPM. Graham's version is on the A side, but the B side was something that only a couple of people knew existed.

Jumping back to the fall of 2008, Graham's wedding was coming up and I thought it would be cool to have some of our friends' bands record covers of "Sea of Green," so I sent out some emails soliciting songs. The only one I ended up getting was from Honey Radar. This pairing seemed like a natural for a one-off lathe cut.

When I got the 7" made, I had planned on mocking up a yellow / orange swirl label similar to the one on the "Yellow Submarine" 45, but I was out of my depth in Photoshop, so I drew it out on a piece of paper with the plan of returning to it later.

Of course, the anonymous record with no label ended up filed away in a box of other 7"s. Every once in a while, I'd flip past it and think, "I should really make some labels for this and send it to Graham." But I never did. Until yesterday, when a reminder I set up told me it was Graham's birthday the next day. I knew what I needed to do. I needed to call Jason and ask him to help me get this thing together.

We texted back and forth, jogged some memories, finally found the original digital files, and then jumped in an online meeting and hashed out the art (with a little help from our friend, H2O). I finished it earlier today, and, after finding the actual record (whew!), I printed up the labels and put them on the 7".

So, here it is! Exactly one copy of "Sea of Green" by Gray Home Music and Honey Radar - our gift to Graham Wood.

It's free to stream and download. Go for it! And while you're at it, don't forget to wish Graham a happy birthday if you get the chance.